Wilbur was Right--You can and Should Talk to Your Horse

Anyone above a certain age will remember the classic 1960s television show, “Mr. Ed.”   The palomino spoke only to his owner, Wilbur and episodes focused on the trouble-making antics of Mr. Ed.


Like Wilbur, I talk a lot to the horses on my farm.  Unlike Mr. Ed, they don’t answer me but I do find that talking to them is still very important.  I use “verbal cues” to let them know that I’m putting on their fly mask (“ears”), for example.  I clean their eyes every morning and all of the horses know what to expect when I say “eyes.” (Okay, I confess that I really say “eye boogies,” but I was trying to pretend that I maintain some level of dignity when I speak to the horses).

Deja is the perfect example of a horse that understands the spoken word.  Like Queenie, Deja came from Days End Farm Horse Rescue (DEFHR).  When she arrived at DEFHR, Deja had never been handled by any person.  Her owner had turned Deja and a large number of other horses out in a field to fend for themselves.  Phoebe fell hopelessly in love with Deja after she was rescued by DEFHR and adopted her despite the horse’s nearly feral nature.

Working with an excellent trainer, Phoebe spent 18 months doing groundwork with Deja and teaching her voice commands before riding her for the first time.  At last count, Deja understands and responds to almost 30 words.

I trained Queenie using many of the same voice commands which has worked out well in terms of herd management.  For example, if I want to bring the horses in from the front pasture, I walk out in the field and say “in” while pointing toward the barn.  I may have to say it a few times but Deja and Queenie will both head for the barn.  The other two horses inevitably follow.   Similarly, if the horses are in the pasture near the barn, I only need to say “in,” and Queenie and Deja will go in their stalls.    Both horses understand that a tap on their leg and the word “foot,” means that they should lift their hoof for cleaning. 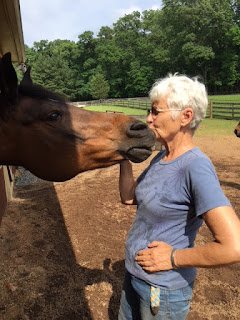 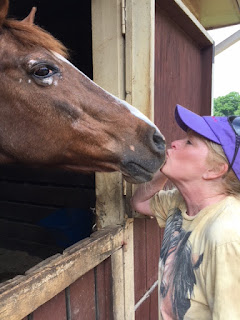 I realized how critical verbal cues can be when a little Mustang named Thunder came to my farm two years ago.  Laury acquired Thunder after Ace, her quarter horse, died of cancer.  Thunder’s previous owner bought him almost 20 years ago in Arizona.  Thunder was trained by the Navajo Nation and had been part of a herd of Western trail riding horses on a ranch in Bumblebee, Arizona.


It was obvious that Thunder is incredibly well-trained and unflappable on the trail.  Laury has never had a problem putting a halter on him or saddling him and he is perfect on the trail from his first day on the farm. Clearly he is very comfortable doing his “job.” It also helped that Laury is an excellent rider so she knew from the first day how to ride a very well-trained horse like Thunder.

But Thunder was truly terrified of anything and everything on the farm.  When I put his feed bucket down, he stood at least six feet away until I returned to the barn.  Even then, he would keep an eye on me in case I suddenly decided to move back toward him.  He was equally nervous if I stood near a gate after opening it to let the horses into a different pasture.  He would stand frozen, staring at me until he thought it was safe and then he would gallop through the gate.  It seemed as though at some point in his life, he may have been smacked as he went through a gate.

Thunder’s previous owner did not believe in putting fly masks or blankets on his horses.  I take the opposite approach for the horses’ comfort and health.  The tiny flies that gather in a horse’s eyes and feed on the moisture there, for example, may carry infectious conjunctivitis, which causes red, swollen and itchy eyes.  Blanketing in temperatures below 40 degrees is more important for elderly horses like Queenie (at least 23 years old) and Thunder (26 years old).

My heart ached to see the fear in Thunder’s eyes anytime I came near him in those first few weeks.  I was determined to work with him so he would be less fearful.  And here’s where talking and verbal cues come in.  Consistently using the cues meant Thunder learned exactly what to expect when I said “ears,” "foot" or any of the other cues.


I started talking to Thunder in a soft, calm voice whenever I was near him while I was cleaning pastures or feeding the horses.  Even if I was just moving from one chore to the next, I stopped to gently pet Thunder and talk to him.  We also had frequent “spa time” where I would brush him while softly talking or singing.  I can barely carry a tune but Thunder never complained.

I had attended a seminar in which Linda Tellington-Jones demonstrated her well-known TTouch method.  Tellington-Jones developed the Tellington Method and TTouch as a form of communication between horse and human.  The method uses circular movements of the fingers and hands in different areas of the horse’s body to increase relaxation and decrease anxiety.

I practiced my TTouch skills on Thunder and he LOVED it.  He would start out with his head up and eyes wide with fear.  Within 10 minutes, his head would drop and his eyes would half close.  For a few minutes at least, I could TTouch Thunder’s fears away.

I confess that I also liberally used treats to help calm Thunder’s nerves.  Some trainers strongly discourage training horses with treats for fear that they will become aggressive in their search for food. And it is true that there is nothing worse than a pushy 1,000-pound animal who thinks you MUST feed him.  But this blog post (thesoulofahorse.com/blog/training-with-treats-stepping-out-of-the-box/) gives an excellent argument for the use of treats because they “enhance communication.”

With Thunder, treats helped him learn that he had nothing to fear when I walked up to him.  It was also a good way to reward him for patiently accepting something he was afraid of, such as the fly mask or blanket.

It took more than a year, but finally Thunder started walking up to me when I called him.  I felt like I had conquered Everest!  Thunder is still a work in progress.  Like Wilbur, I will continue to talk to Thunder and the other horses.  And they might even answer me in their own way with the occasional soft nicker.