Denise and Donna, otherwise known as the Clydesdale Ladies, are relatively new boarders.  Like Queenie, their huge mare and gelding are rescues.  I mentioned one day that I didn’t know much about Queenie’s history before she was with the Arabbers.  “If only she could talk,” I lamented.  Denise and Donna immediately told me about the animal communicator that “spoke” with their two Clydesdales, Mandy and Mason.  They offered to ask her to come to the farm to speak to our horses.

I confess that I am highly skeptical of people who claim they can speak to animals or the deceased.  I generally regard it as a money-making scam.  However, Donna and Denise assured me that the communicator did not charge.  They had given her a donation, but that was completely optional.

Once I heard that the communicator was “free,” I was on board.   I thought it would be an entertaining afternoon, sort of like watching a mind-reading act.  After the date was set, however, I found out that I had another commitment so I asked to have the communicator meet with Queenie first and then I could leave immediately after.


How does animal communication work?

Animal communication, or inter-species telepathic communication, is the process of transferring thoughts, images and feelings from one party to another using extrasensory perception.  Animals are able to relay a surprising depth and variety of information about themselves and their environment, including physical sensations, emotions and perceptions.

The transfer of information using telepathy is like the sound and picture waves generated by telephone, radio and television transmitters.  You can’t see or feel them, yet they surround us all of the time and can be accessed in an instant when we tune to the right channel.

Accessing this telepathic field is a skill that comes naturally to all animals, including the human animal.  We as humans, with thousands of years of verbal language orientation, have largely forgotten this skill.  Animals, however, remain strongly connected and are skilled telepathic communicators.


Misunderstandings frequently arise between humans and animals because we do not “hear” one another accurately. Our animals are broadcasting their needs and we are not tuned in to their channel.

In fact, I felt like Queenie had a difficult time bonding with me.  Undoubtedly, her experiences had told her not to trust or care about a person because soon enough she would be shipped off to a new home.  I used to describe Queenie’s expression as “flat.”  I would see other horses in the barn with bright eyes and inquisitive natures while Queenie just seemed to say, “I’ll go along with whatever you want, but I’m not going to enjoy it because it won’t last.”

It took months of love and patience on my part, but I finally began to see a glimmer of life in her eyes.  As you can see by these recent photos, I think we have an amazing bond now. 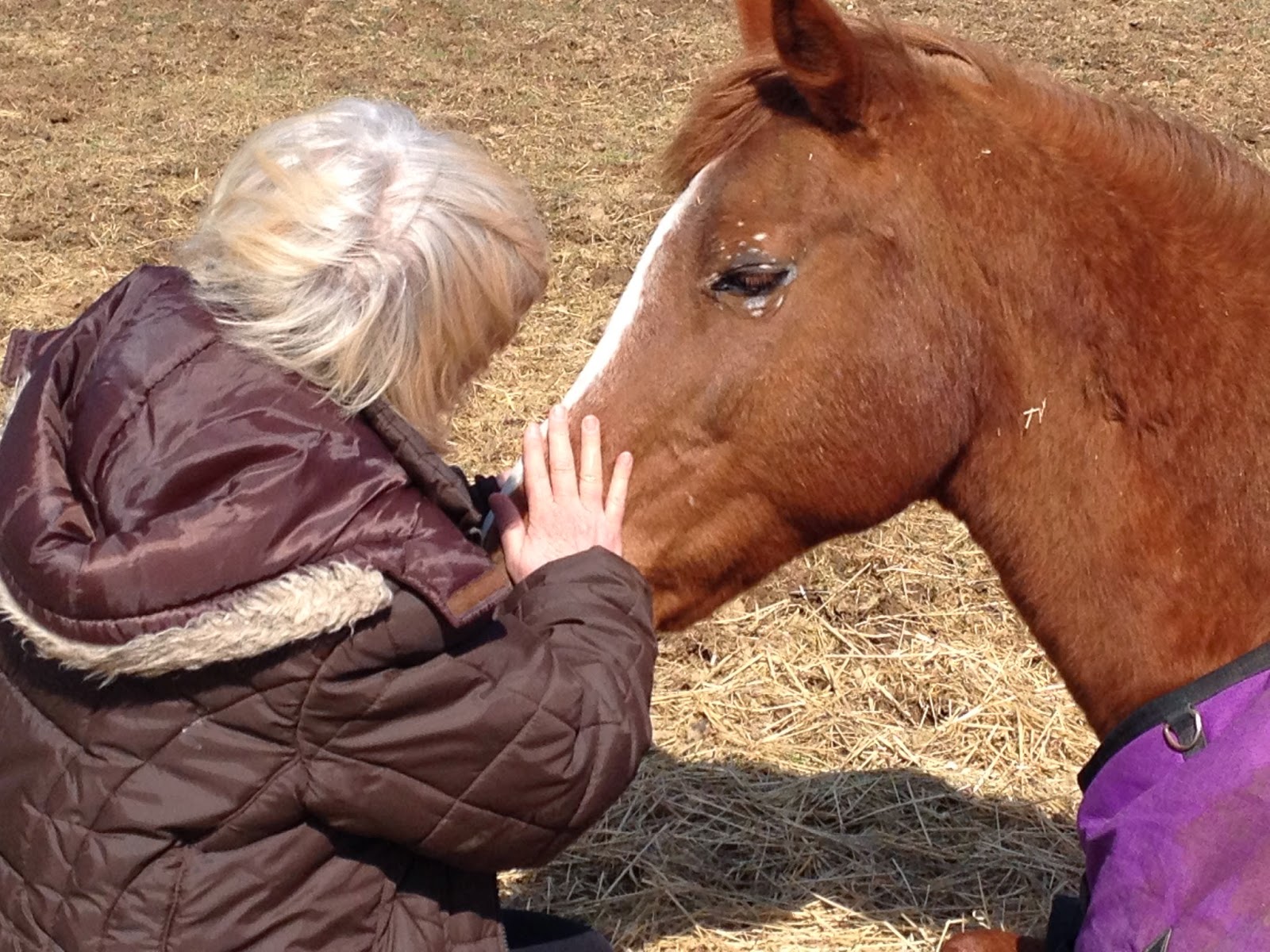 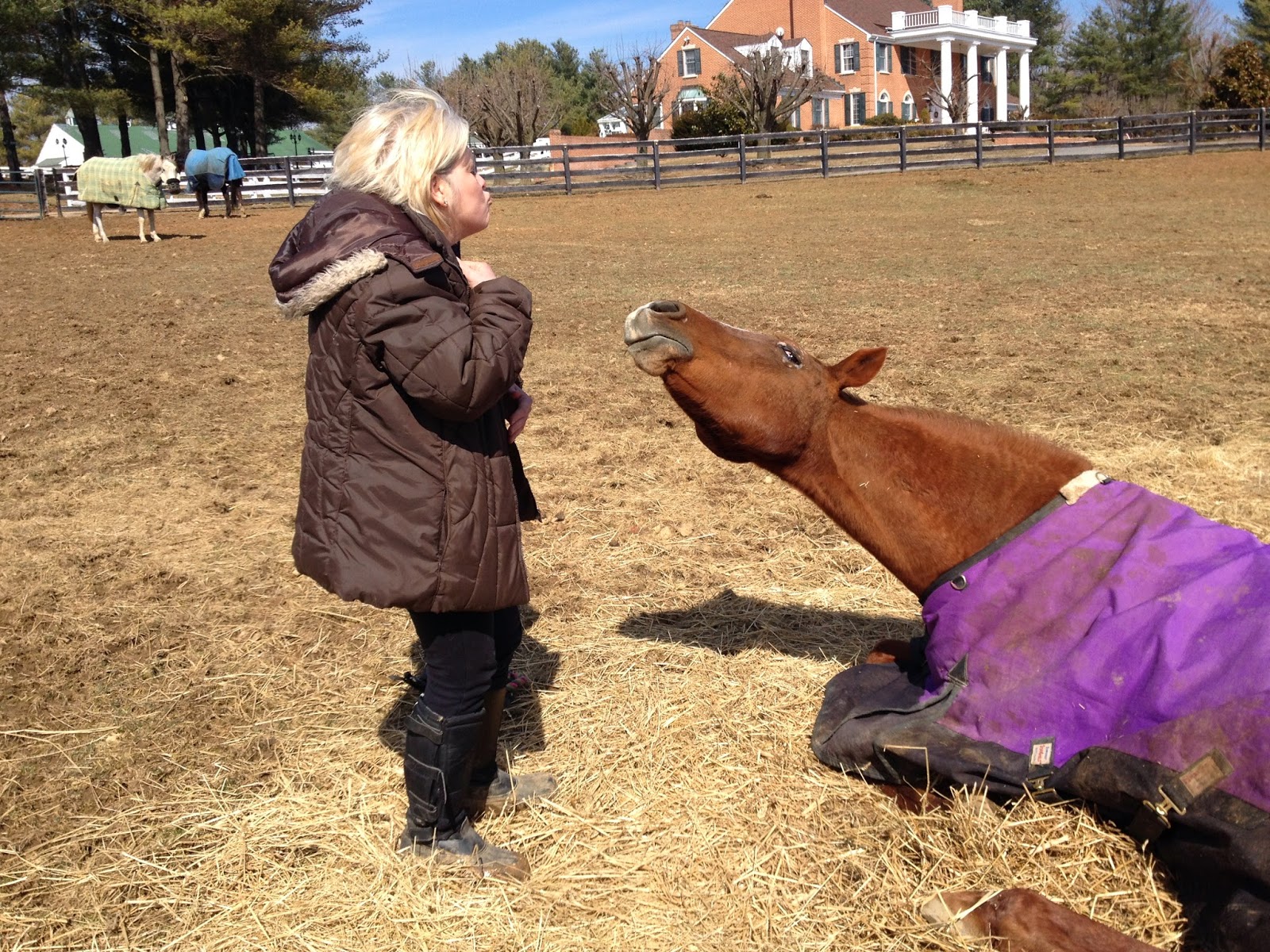 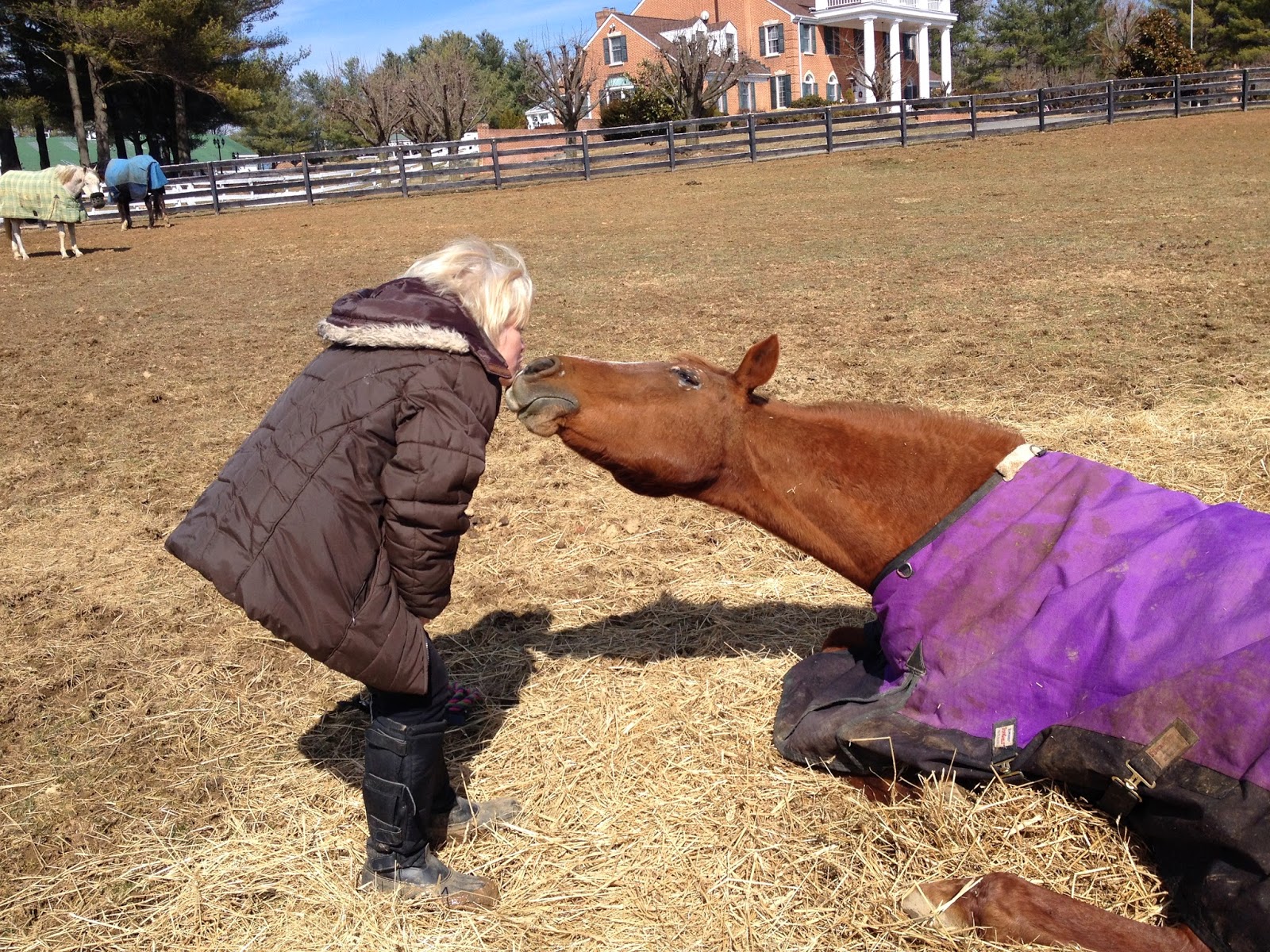 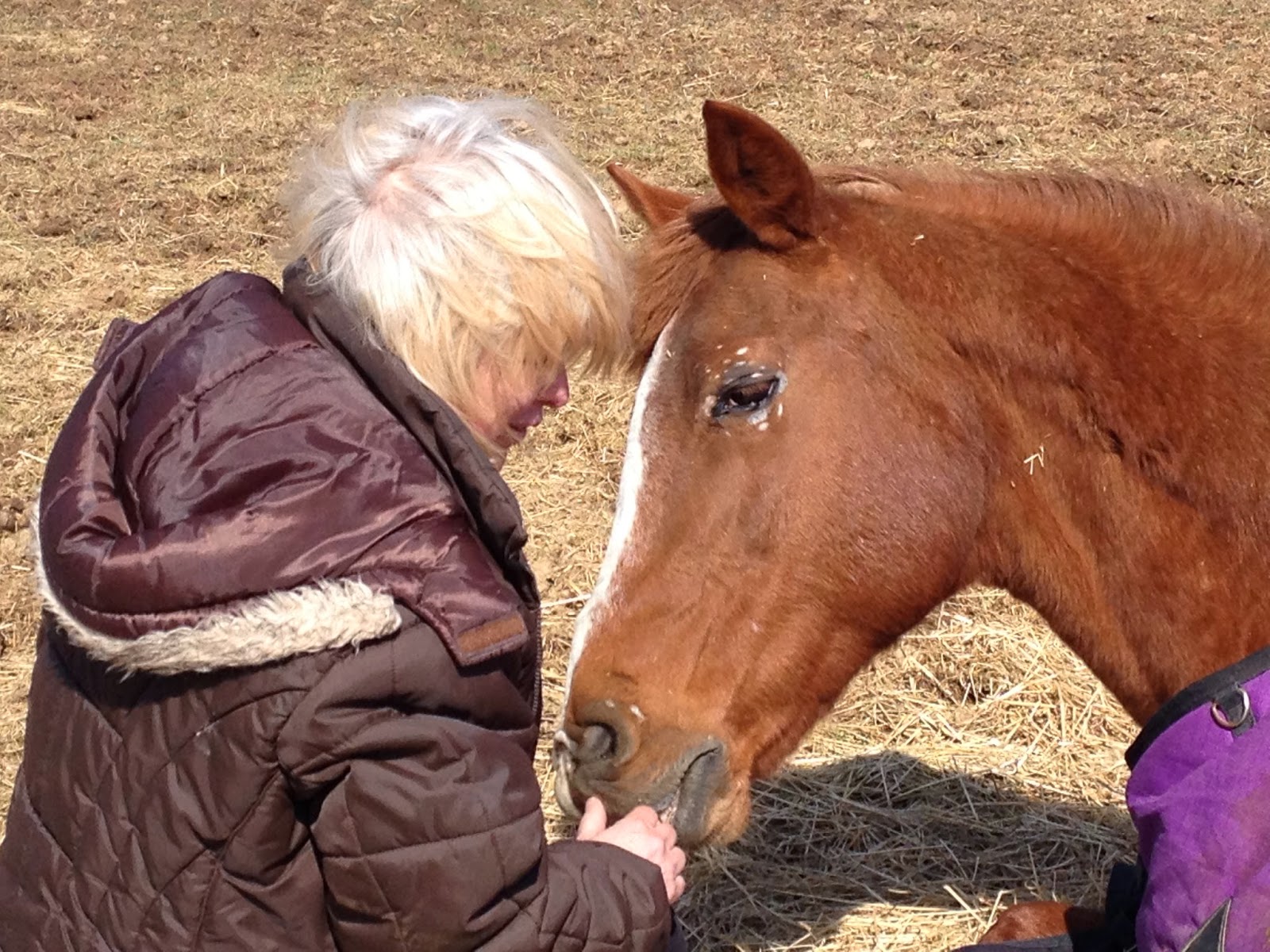 Queenie went on to tell the communicator that she knew she was the center of my world because I had endured such heartache in the past year.

Okay, score another one for the communicator.

My family always has and always will be the main focus of my life but Queenie is the center of my world in the sense that I live on the farm where I board her. It allows me to spend far more time with her than other people who board their horses. And yes, I had some personal ups and downs over the past year.

Number three for the communicator followed quickly when she said that Queenie told her that our first few months together had been “bumpy.”

That was definitely true.  As I’ve mentioned in earlier blog postings, I had a 43-year hiatus from riding.  When I got Queenie, the only thing I was certain of was that the head was at one end of the horse and the tail at the other.  I felt like everything I had learned about riding as a teenager was completely wrong.  So I was unlearning as well as learning.  Yep, Queenie was right, there were lots of “bumpy” days.

Score another one for the communicator.  I could feel my skepticism starting to slip a little.

All horses that come in to Days End Farm Horse Rescue receive new names to symbolize getting a fresh start on life.  The communicator said she was having a hard time getting Queenie to say what her name was before she arrived at Days End.  After several minutes, the communicator said, “Daisy.  Her name was Daisy.”  Now, I swear that I am not exaggerating this but as she said the name, Queenie’s ears went straight back as if she was angry.

Now it was starting to get creepy.

Remember, that at this point I still had not given the communicator any information about Queenie.  So you can imagine my shock when the communicator said, “Queenie says she remembers being taken to an auction.”  I was already feeling a little weepy after the communicator mentioned my difficult year but the image of Queenie at an auction made me cry because it is probably true that the Arabbers had purchased her at the New Holland auction.  I could just imagine how frightening all the noise and confusion must have been for her.  If you have the stomach for it, you can read one person's description of New Holland here.

I have talked to many people, including my vet who treated the few remaining Arabber horses, and they said that the Arabbers typically went to the New Holland auction to acquire their cart horses because the Amish often bring their horses there when they are “done with them.”  It would make sense that Queenie could have been an Amish cart horse and so she would have been a perfect fit to pull a produce cart for the Arabbers.  One of the other barn ladies asked me if it was true that Queenie had been sold at auction. I held back tears and nodded yes.

The communicator leaned down for further “conversation” with Queenie.  After a few minutes, the communicator stood up and said to me, “Queenie says you tense up your shoulders when you ride.”

Though she is gaited, Queenie has difficulty sustaining a smooth gait.  When she decides to trot instead of gait, it's like sitting on top of a jackhammer—or at least that’s the way it feels with my perpetually painful back (due to a slipped disk).  And yes, we can also chalk the tense shoulders up to inexperience on my part.

I wasn’t able to stay to hear the communicator's talks with some of the other horses and one dog.  However, the owners have told me that many times she was spot-on.  I laughed when I heard, for example, that Zoe’s horse, Deja told the communicator that she had nothing to say to her.  That is so Deja.  She’s a feisty little Arab who has absolutely no problem letting you know how she feels about things.  I could almost hear Deja saying, “F… off and by the way, don't touch me and get out of my stall.”

Zoe asked the communicator to find out why Deja hates trailer loading.  The communicators reported reading of Deja’s thoughts was way off.  She told Zoe that she got a mental image of Deja in a show ring with streamers and children’s voices.  Deja has never been shown.  Far from it.  She was rescued from a horrible situation.  A breeder ran into financial difficulties and simply turned Deja and all the other mares and stallions out into a field together.  She did not provide food or any form of care.  Deja had two foals by the time she was four years old.  It’s a testament to Deja’s fiery temperament that she was able to keep her two foals alive while many of the others were killed by the stallions.
So did Deja’s lack of willingness to chat mean that the communicator could not correctly interpret Deja’s thoughts?  Or did the communicator simply take a wild guess and miss by a mile?

One of the horses told the communicator that she had been owned by a woman who became very ill and so she had to give the horse to our barn owner.  That was 100% accurate.  I’m not sure I can attribute that to coincidence, lucky guesses or reading cues from the owner.

Am I any less skeptical about some humans being able to talk to and understand animals?  I would say that I remain fairly convinced that it can’t happen.  The problem is that I cannot explain how the communicator was able to accurately report details about the horses.  Is she just really good at reading people and getting hints from what we say and how we act?  In my case, I made it a point to say practically nothing to the communicator.

So I still don't know the answer to the question "Animal Communication: Fact or Fabrication?"  I’d be interested in hearing other bloggers perspectives and experiences.
Posted by Farm Living is the Life for Me at 6:26 AM 3 comments:

Let's All Do the Furminator!

No, the Furminator is not a new dance step.  It is simply the most amazing tool ever for removing a horse's winter coat.

I had seen the Furminator at pet stores but the $55 price tag caused sticker shock!  I bought a similar tool (I call it the Fauxminator) but it did not work very well.  We were discussing the Furminator at the barn one day and I decided to Google to see if I could find a lower price.  There it was--the large tool for short-haired animals for just $25.  Sold!!! 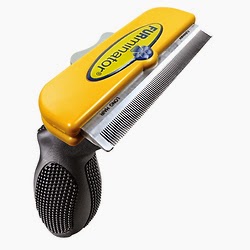 When the package arrived, I tore it open and raced to Queenie's stall to put the Furminator to the test.  After10 minutes, I had removed the equivalent of a small cat from Queenie. I have to admit that it is amazingly satisfying to groom Queenie and watch the pile of winter coat grow. 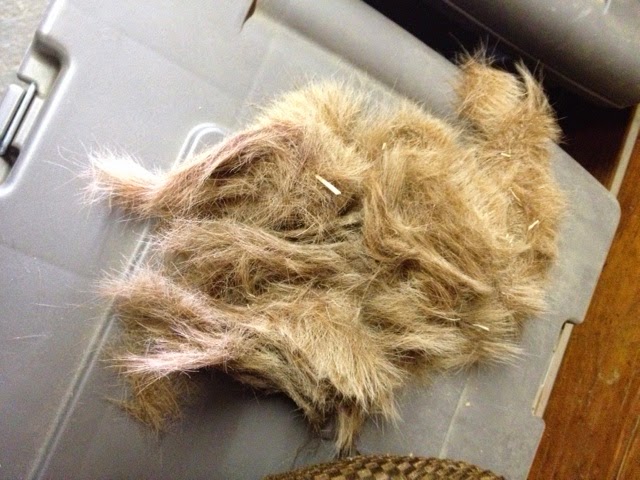 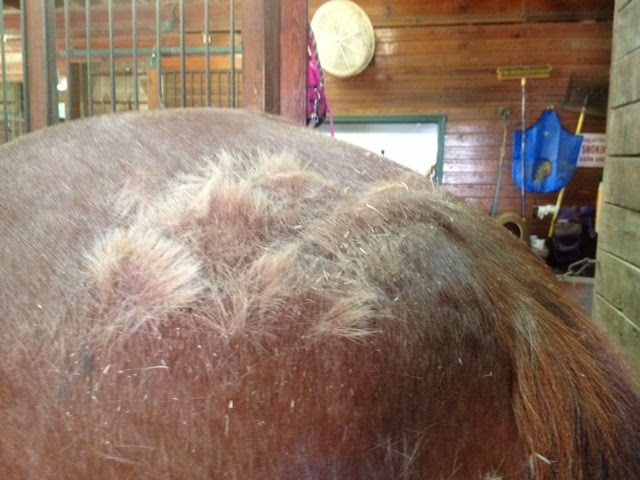 I've since learned that there is an equine Furminator.  Here's a video demonstrating its use.

And the bonus is the hair removed with the Furminator comes out in these really cool shapes. 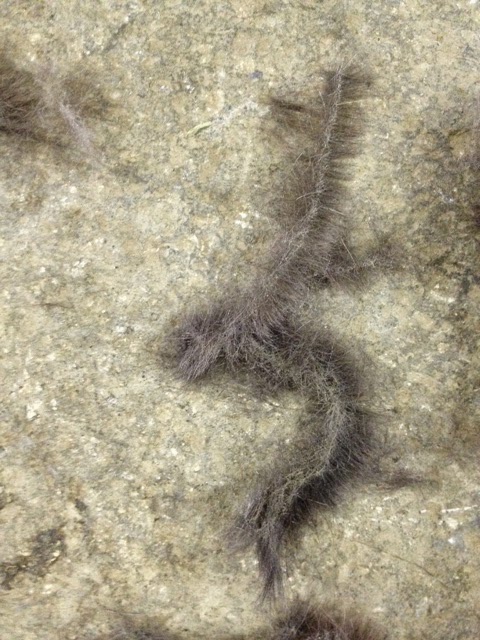 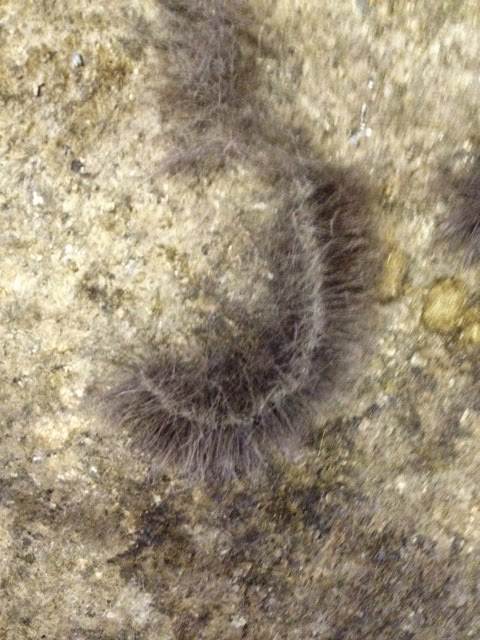 This video from Duncraft's Wild Bird Blog demonstrates how much birds love animal hair for building their nests. The titmouse is getting hair for his nest directly from the source.  Be sure to put the hair you groom from your horse outside so the birds can "feather their nests."