Days of Their Lives: A Case of Unrequited Love

Like sands through the hourglass, so are the Days of Their Lives........**

He saw her across the large expanse of grass and his old heart skipped a beat.  At his age, he had long abandoned thoughts of love.  For more than a decade, he had spent his time with his best friend.  They had been through everything together and his buddy had been his constant support during his recent surgery and treatment for cancer in a most uncomfortable area.

Moving to a new abode meant a much smaller place with fewer residents.  As they were settling in, he got close to her for the first time. The sun was shining on her copper hair and he couldn't help but notice her large brown eyes with long golden lashes.  He watched her walk away with her friend.  He tried to catch her eye again but she was busy eating.

He turned to his buddy and said, "Oh, I am in love.  It's been a long time but I'm pretty sure I remember what loves feels like."

It wasn't the warm greeting he had hoped for.  Instead she glared at him and made it VERY clear that she wanted NOTHING to do with him.   She clearly preferred to spend her time with her friend and was not in the mood for the affections of a senior citizen. (Truth be told, she's only five years younger). 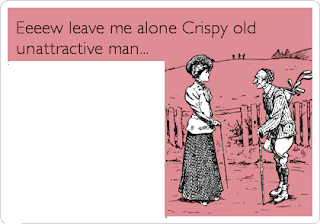 In the days that followed, when he had a chance to be near her, he would tell her (loudly) that he
found her enchanting.  She would listen for a minute and then give him the big brush off.  "Leave me alone old man," she stated in no uncertain terms, often following her feelings with a teeth-baring sneer.  Her friend echoed the sentiment, "Buzz off, you old geezer."


Every morning when the four met for breakfast, he would speak to her.  "You're beautiful.  I want to see you and be near you."  She would glare at him or do the teeth thing. Sometimes she would even turn around and say, "The only thing you'll be seeing is my backside as my friend and I walk away." 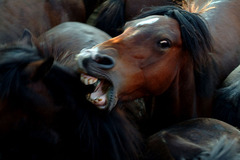 So many times a day he made sure to position himself so he could spot her at a distance and call, "Yoohoo.  I'm here and I love you.  Won't you come closer so we can get to know one another better?" If she did come near, he would scream in delight.  The result was often a very short meeting as she gave him a disgusted look and forced her friend to move quickly away from the overzealous suitor.

One day she and her friend went out for a walk in the woods.  He screamed and screamed and screamed, "NO, DON'T LEAVE ME."  His buddy calmly stated, "Get a grip, man.  You know when they go out dressed up that they always come back."  Completely love stricken, when he saw her returning less than an hour later, he let the world know (or at least the next farm) how excited and happy he was.

As the days went by, the girls' anger at the new residents began to subside. The ladies and gentlemen now peacefully share the food and drink.  But it's still no love fest. 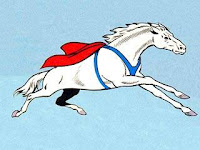 So join us again tomorrow for another episode of "Days of Their Lives" when Ace finally stops making stallion sounds at Queenie and she quits turning and backing up to give him a good swift kick.  And we'll see Queenie continue to relish her new-found role in the herd--Protectress of Deja. That's in sharp contrast to her previous status as the lowest member of the herd. The boys will continue to stick their heads in Deja's stall so they can see what's going on.

And Newton will continue to stay out of the fracas by putting his head down and gobbling up the nice sweet grass. 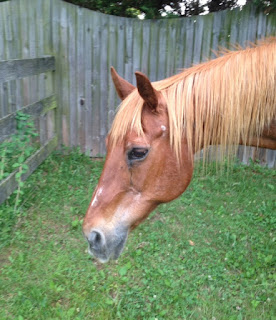 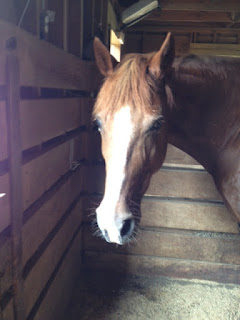 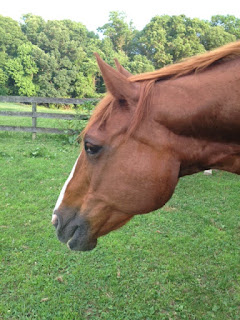 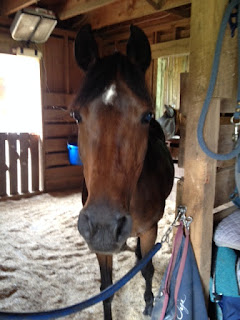 **If you're not a soap opera fan, you may not be familiar with Days of Our Lives.  The show began in 1965 and is one of the few soap operas still on the air.  Almost unmodified since the show's debut in 1965, the title sequence of Days of Our Lives features  sand falling in an hourglass as well as the trademark voiceover, "Like sands through the hourglass, so are the Days of Our Lives."