My First Experience with a Bad Boy

We met briefly on a warm summer afternoon.  It was a quick introduction but Bad Boy's (BB) sleek build and heavy muscle made my heart beat a little faster.  My hands itched with the desire to touch BB again.  In other words, I couldn't wait for our next encounter.

Over the next few weeks, I often thought of my BB and how we would get along.   When the fateful day came, I quickly realized that I had no difficulty getting BB to respond to my first inept attempts.   We were in sync in several ways but BB just could not complete the most important task.  I was frustrated and I tried not to feel angry.

After BB's checkup and proper treatment, we gave it another try.  Again, BB was incredibly responsive to my touch and rose to the occasion. Success, however, eluded me again.  All my years of experience were failing me.  I guess I was going to have to go back and read as much as I could on the subject.

Yesterday, I felt BB and I were ready.  I climbed on top and began pulling and pushing different parts until I felt BB vibrating beneath me.  When we reached a steady rhythm, I gave a final push.  I was elated that we at last were in complete harmony!!

In no time, I had the front lawn mowed.

Oh wait, did I fail to mention that the Bad Boy is the brand name of my new lawn mower??

This blog post is aptly named since after nearly three years of riding, I fell off Queenie.  Whack!  Right on my back.  Luckily, I wasn't hurt.

I always say that if something bad has to happen, I hope that I at least get a good story out of it.  Well, my fall is one heck of a story.

Zoe and I took our girls out the gate in the back pasture for a ride through Rachel Carson Park.  It was a beautiful fall afternoon and we were enjoying a casual ride.  At about the halfway point on the trail, a fallen tree formed an arch across the trail.

Zoe and Deja followed a narrow path around the tree.  But Deja made a significant deposit on the path and Queenie decided she didn't want to step in it.  She turned and walked right under the tree.  She had no problem fitting but I was going to hit the tree at waist level.

In the split second that it took Queenie to get half of her body under the tree, I apparently took complete leave of my senses.  I grabbed the tree and pushed against it as Queenie continued walking.  I didn't let go so before I knew it, I was lying on my back on Queenie's rump still clutching the tree.  I felt like I was part of a circus act. 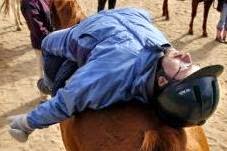 As Queenie continued sauntering forward, I did not let go of that tree.  Perhaps after years of watching my daughter compete in gymnastics, I thought I could just swing my legs over the tree, jump down and salute the judges. 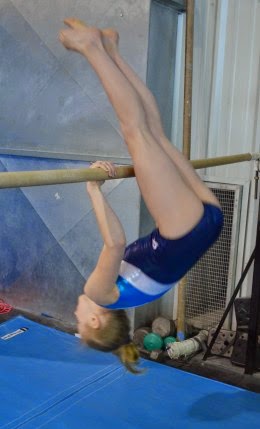 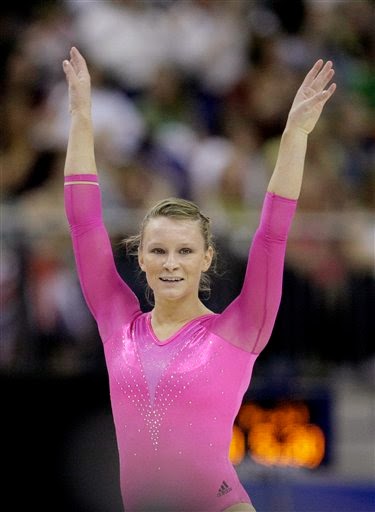 Did not happen.  Instead, I rolled slightly, fell off Queenie and hit the ground.  I confess that in that one second between leaving Queenie's back and eating dirt, I thought, "Oh shit.  This is gonna hurt."  Zoe had no idea all of this was going on behind her until she heard the "thunk" when I made contact with the ground.

I laid there for a minute stunned and staring up at the sky.  The first thing I said to Zoe was, "do you have Queenie?"  As I slowly rolled up, I started laughing at how ridiculous I must have looked in the 30 seconds it took for the whole grab-the-tree, lie-on-Queenie's back, hit-the-ground event to occur.  Where is a camera when you need one?

I credit my safety vest and helmet with preventing serious injury.  I only have a few scrapes and bruises on my arms.  I thought I might be sore today from the impact, but I'm not.

Oddly enough, even though I was wearing heavy boots, I must have jammed the toes on my right foot when I hit the ground.  I don't think anything is broken, but two toes are bruised and I'm limping a bit.

I don't think that I will be wearing the high-heeled shoes that I had picked out to wear to a wedding this weekend.

The old adage is that you have to fall off a horse three times before you are considered an experienced rider.  I hope that I can count the two times that Queenie decided to lie down and roll while I was in the saddle (read about those adventures here and here) plus my "Whack! Wednesday" event and call it done. I borrowed the title of Jason Aldean's new album for this blog post because it describes the major change in my life so perfectly.  I just finished moving all my old boots (and a lot of other stuff I hadn't realized that I had stuffed into a two-room apartment over the past two years) to "new dirt"--my very own farm.

I've named it Copper Penny Farm because I wanted to honor Queenie.  She was the first step in making my dream of rural living come true.  When Queenie's coat was so shiny this summer, I started calling her "my beautiful copper penny."  Zoe thinks the farm's name also is appropriate because it's costing me a pretty penny!!


I still pinch myself that my life-long dream has come true.  The farm is a stone's throw from the barn where I lived and boarded Queenie.  My farm is 7.6 acres and is absolutely perfect for me.  There are five pastures, a two-stall barn and a run in.  A gate in the back pasture provides direct access to the many trails of Rachel Carson Park.

Queenie will be joined on the new farm by Zoe's horse, Deja and Saiph's horses, Lily and Gracie.  The accommodations are perfect because Queenie and Deja have always been in stalls while Lily and Gracie have been fieldboarded.

I moved in two weeks ago and the first task was to clean out the barn which had been empty for a couple of years.  Zoe, Saiph and I grabbed masks and brooms and went to work removing the thick dust and spider webs that seemed to cover every surface.


I also got my first look at dirt daubers--a type of wasp that builds their nests out of mud.  The empty nests were on the walls of the stalls and, luckily were easily scraped off with a shovel.


One of the big concerns I had was how to get hay delivered to the barn since it's located behind the house and isn't easily accessible by vehicle.  As a test, I drove my truck through the side yard and  pasture.  Problem solved  (as long as it's dry, that is)!!! 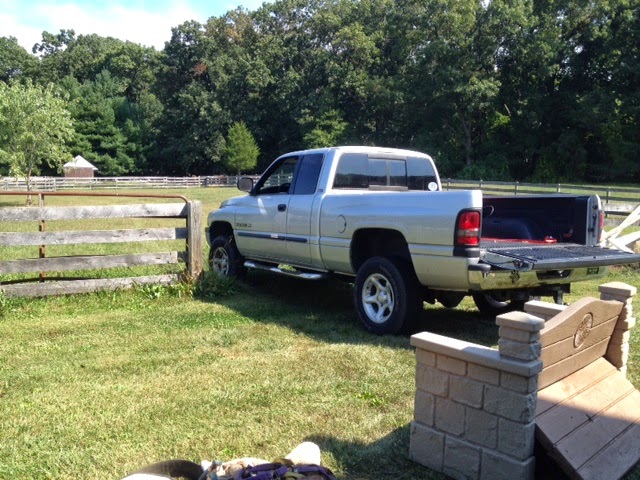 Once clean, it became a masterful feat of organization to get all of the horse paraphernalia belonging to three people and four horses to fit in the small barn.  I had spent hours looking at all the beautiful barns and many ideas for storing tack, etc. on Pinterest.  I had big ideas but I quickly found out that a limited budget and small space means my barn won't be featured in the pages of Better Barns and Pastures. 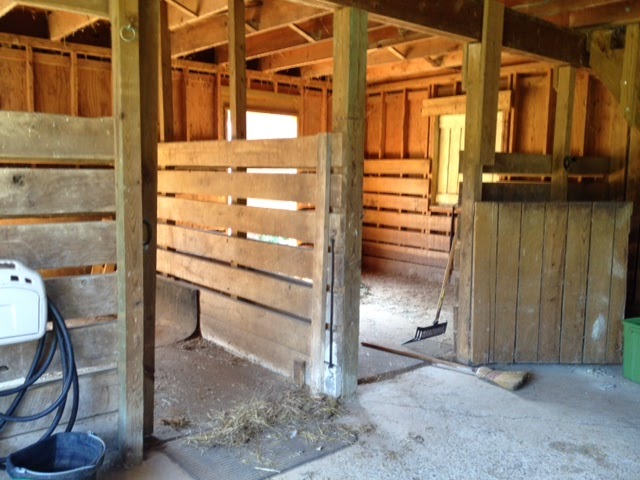 The barn was set up for two horses so I needed to acquire additional saddle racks, bridle brackets, etc.  Luckily, I volunteer one day a week at the Day's End Horse Rescue tack shop.  I bought much of what I needed there for a fraction of the cost of new items. 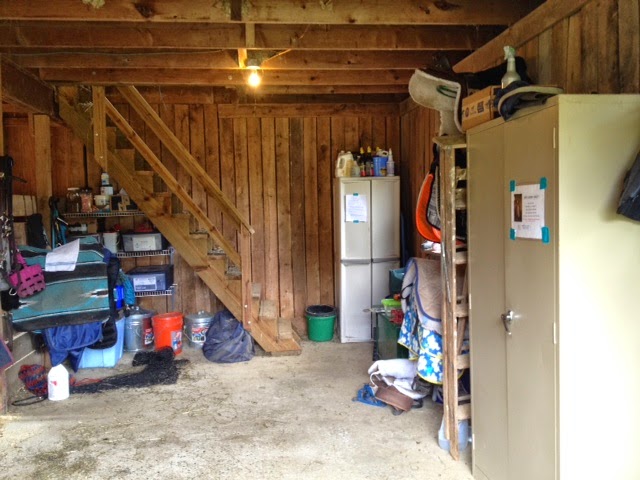 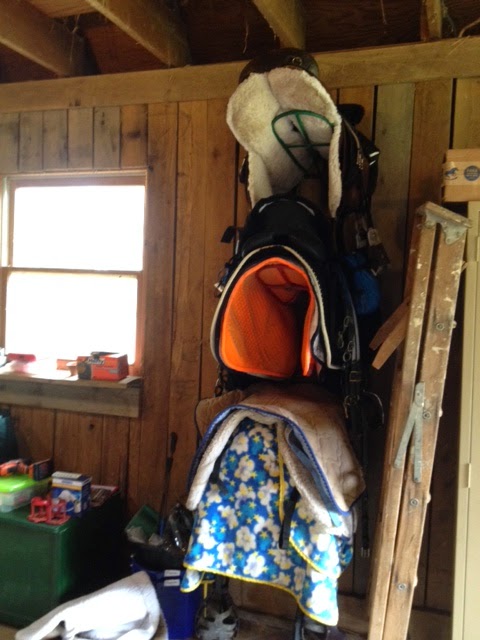 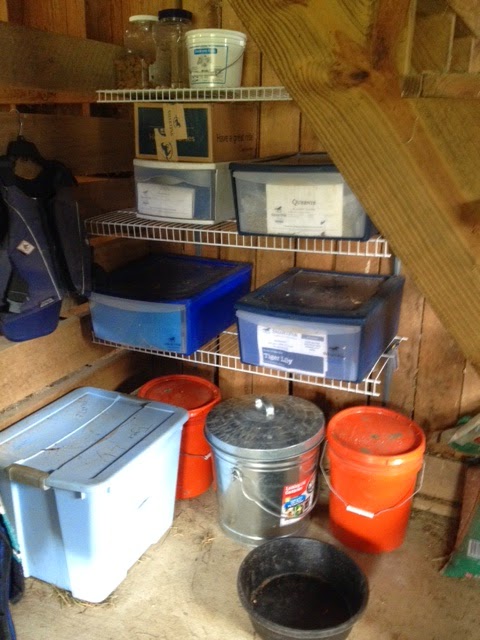 There is no way, however, to scrimp on the cost of hay.  Our horses are used to high-quality hay so I ordered from the same farm as the owner of the boarding barn.  I suffered from major sticker shock, though, when 250 bales of hay and five bales of alfalfa cost nearly $2,000!!


Even though I lived on a horse farm for nearly two years, I feel like I'm standing at the bottom of the learning curve when it comes to owning a farm and running a boarding operation.  I'm lucky to have Zoe and Saiph as boarders since both are very knowledgeable about horses.

Count on many blog postings about how and what I've learned as I charge forward into living my farm dream. 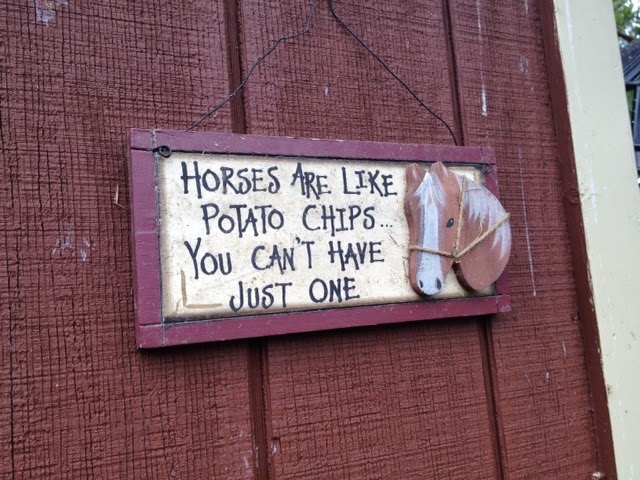