It had already been an interesting ride before I heard those fateful words.

I joined seven people from the Central Maryland Saddle Club for a ride at Morgan Run Park in Carroll County.   It was hot (90+ degrees) but it felt at least 10 degrees cooler in the heavily forested parts of the trail.  I was looking forward to a quiet ride and the chance to meet new people.


For the first half of the ride, Queenie was ahead of her "boyfriend" Ace.  He is boarded on my farm and Laury, his owner and I ride together quite often in the park behind my farm.  Ace and Queenie are very attached to each other.

So attached apparently that when another horse got behind Queenie and separated her from Ace, she started to buck.  I was not prepared because I hadn't realized that Blondie (an appropriately named Palomino) had moved in behind Queenie.  She did two pretty good bucks but I managed to stay in the saddle.

The first buck pitched me forward and I felt the saddle horn hit my stomach.  Once again, I was thankful that I was wearing my riding vest.

One of Queenie's greatest qualities is that she can get very upset and then calm down as if nothing happened. After my heart stopped feeling like it was going to pound right out of my chest, Queenie resumed her slow and steady walk (with Ace behind her) and I enjoyed the beautiful woods and interesting sights along the trails.

There are a few structures remaining from a farm that was on the property before it became a park.

Now to the more (most) exciting part of the ride.

We reached a lovely stream and the horses splashed through, enjoying the cool water.  Queenie and I didn't linger in the water since she surprised me once by lying down in a creek (check out the story here). 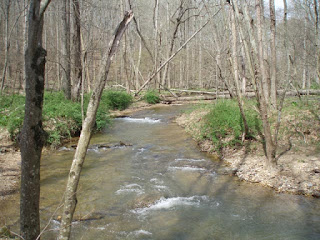 After the stream crossing, the trail narrowed to single file.  Once again, Ace fell in behind Queenie and there were two horses ahead of her.  We were in the woods and passed some logs.  The horse ahead of me stopped and put her head down to scratch her front leg.  I heard her rider wonder aloud what was bothering her.  At that same moment, Queenie began shaking, jigging and biting herself.

Suddenly Laury yelled, "Bees!  Run!"  Luckily, I have heard enough stories about bee attacks that I knew the best response to a swarm of ground bees is to get the hell out of Dodge!  Ground bees apparently do not travel far from their nests so you can outrun them.

I didn't need to hear Laury's warning more than once.  The horses ahead of me moved out quickly and Queenie and I didn't waste a second!  My old girl can really move when ground bees are repeatedly stinging her.

And what a ride!!!  Queenie was shaking her head while she was racing along the trail and she would periodically do what we refer to as the "wet dog shake."  It's hard to stay on when a horse is standing still and does that shake.  At Queenie's rapid pace, it made me feel like I was going through the spin cycle! 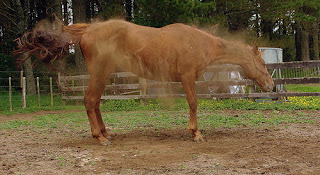 I am quite certain that in the one minute (seemed like ten) hellish ride, I forgot every single thing that my trainer ever taught me (sorry, Bob).  My arms and legs were undoubtedly going in any and all directions as we followed the winding trail.

Oh well, our escape didn't have to be pretty; we just had to get away from those really mad bees.

The good news is that I again managed to stay in the saddle.

Before the next ride though, I'm buying an industrial-sized bottle of Gorilla Glue and applying it liberally to my saddle. 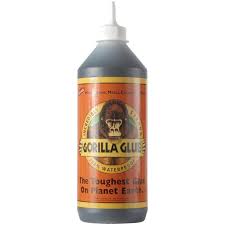 Posted by Farm Living is the Life for Me at 5:44 PM No comments: